Both Wingrave and Rowsham have specific and separate traffic issues that arise from the extent of housing and road developments over the last few decades.

Rowsham straddles the A418, which provides the main route between Aylesbury and Wing and then onto Leighton Buzzard and the A4146 to Milton Keynes. There has been a historic problem with speeding, which has been alleviated to some extent by the introduction in March 2009 of a 40 mph speed limit, “white boundary gates” and flashing speed indicator signs at each end of the hamlet. However the most recent AVDC traffic report of March 2010 indicated that average speeds are almost constantly over 40mph and that the highest average speed over a full hour is consistently over 50mph. The report also showed that between 12,000 and 24,000 vehicles per day travel through Rowsham.

The A418 effectively splits Rowsham into two sections, as with no controlled pedestrian crossing, the road is extremely difficult to cross. Despite this, children who live in Rowsham have to cross the road to catch the school bus.

Wingrave is situated approximately 1 mile from the A418.  Three roads feed into Wingrave:

The 2004 Parish Plan highlighted the speeding problem through the village with speeds of over 60 mph recorded. This led to the introduction of the “white boundary gates” at each entrance to the village and the occasional use of a speed detection vehicle on Leighton Road. These measures have alleviated the problem to some extent but residents still consider speeding to be a problem.

The most recent traffic report of November 2008 indicated the following (all figures are 5 day weekday averages):

There are over 1,100 vehicles registered within the Parish. Further traffic is created by Wingbury Courtyard, which is accessed via Leighton Road. These traffic throughput figures suggest that a substantial number of additional vehicles are using Wingrave as a cut through.

An AVDC report on accidents on the A418 between 01/08/08 and 31/07/11 shows 14 accidents involving a total of 21 casualties with 1 serious accident. At the time of this report there were no further available statistics on road accidents.

The questionnaire asked whether residents wanted to see traffic calming methods adopted in the villages.

The overwhelming response was that further traffic calming is required with various solutions being suggested, although these are specific to each village.

The questionnaire also asked for residents’ views on where traffic calming would be most effective and what methods could be suggested.

In Rowsham the main responses were the need for a bypass, a further reduction in the A418 speed limit to 30mph and a pedestrian crossing over the A418.

The top four traffic-calming suggestions for Wingrave were speed-bumps, speed indicator signs, chicanes and a 20 mph speed limit. There was also some concern noted about traffic calming measures, which in some cases cause inconvenience and vehicle damage (eg speed-bumps). 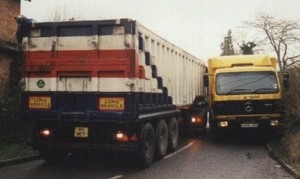 The increase in the volume and size of HGVs has had the knock on effect in an increase in the level of road noise, which is clearly audible by Rowsham residents and, to a lesser extent, Wingrave residents.

A further problem experienced by Wingrave is the use of the village as a cut through by HGVs going to the A41 bypass via Dark Lane.  This is resulting in the road surface breaking up and cutting into the banks on Dark Lane and verges as they travel down Tring Road to Long Marston.

The 2004 Parish Plan identified several blind spots within the village:

There have been no measures taken since 2004 to alleviate these issues.

Whilst not a blind spot, responses from Rowsham indicate problems caused by the volume and speed of traffic on the A418 making turning into and out of the side roads (Bennetts Lane, Brewhouse Lane and Manor Road) difficult at certain times during the day.

The Questionnaire asked whether residents considered there were adequate parking arrangements in the Parish and if not what were the main areas of concern.

306 (51%) of the 597 responses received indicated that parking is a problem in Wingrave.  In particular:

Parking in the main thoroughfares through the village and in the side roads causes traffic congestion, variable speeds as vehicles attempt to rush through the pinch points, and obstructs pedestrians, in particular the immobile.

The parking issues arise mainly because many of the older properties have little or no off-street parking, and there is limited parking provision in the centre of the village where many of the well-used amenities are located. The only communal parking facilities are adjacent to the War Memorial Green.

The main pedestrian issues highlighted in the questionnaire responses were on-street parking, particularly around the shop in Wingrave, children crossing outside the school in Wingrave, speeding through both villages and crossing the A418.

Currently there are no dedicated pedestrian crossings within Wingrave.  There are two uncontrolled crossings on the A418 at Wingrave crossroads and one at Rowsham.

Many pavements around the villages are in poor condition with broken surfaces as a result of frost damage or tree roots working through. Few of the pavements have drop-down kerbs.

There are no pavements along the length of Nup End, Church Street, Lower End, Dark Lane or Mill Lane.  Winslow Road and Leighton Road are paved, albeit in places staggered and a paved path extends to A418 on the Allotment side of Winslow Road.

A good example is Church Street, which twenty years ago saw little more than farm traffic and a milk float, but which is now quite a busy thoroughfare, but used by a lot of schoolchildren walking to the Primary School and also the bus pick up point for the older children going in to Aylesbury and Wing. It has no footpaths or space to put a footpath.

273 positive responses were received in answer to the question: Do you think there should be any cycle routes to and from either village?

Currently no routes exist within Rowsham or Wingrave or connecting to the wider area.  Feedback suggests making use of some existing footpaths or tracks to connect our villages or new routes parallel to the A418.  Provision of cycle routes for children enabling them to cycle to and from school was also suggested.

Both Wingrave and Rowsham are well served by a network of footpaths, including a circular walk around Wingrave. There is also a footpath connecting Wingrave with Rowsham that continues on towards either Weedon or Aston Abbotts.  Feedback from the questionnaire suggests that signage on these routes needs to be improved and that the routes could be better advertised.

Since writing the 2004 Plan AVDC has been replacing worn styles with kissing gates where it is practical to do so, and this plan is on-going.

However, problems have been experienced with delays in cross-field paths being re-instated following cropping and ploughing.

Within Wingrave it has been noticed that some tarmac footpaths are now used as vehicular access to properties.  In addition to wear on the surface and subsequent damage, it also causes problems for pedestrians.

Further improvements were suggested in the 2004 Parish Plan, which involved upgrading footpaths from Castle Street to Rowsham and from Rowsham to Aston Abbotts for equestrian use, but these have not been implemented.

An hourly bus service operates between Aylesbury – Rowsham – Leighton Buzzard – Milton Keynes; bus stops for this service are located at Wingrave cross-roads and Rowsham.  The service runs 5-days a week with a reduced service on Saturday and no service on Sunday.

A further service operates between Aylesbury – Rowsham – Wingrave – Aston Abotts – Cublington – Leighton Buzzard.  There are 8 buses 6-days a week with no service Sunday.  There is no late service on this route; the last bus leaves Aylesbury at 17:15.