The Parish Council commenced the preparation of a Neighbourhood Plan in late 2012 when it was realised that the 2011 AVDC Vale of Aylesbury Plan would not necessarily protect the Parish or reflect the wishes of Parishioners as expressed in the consultations for the Parish Community Plan. The 2011 AVDC Plan called for up to 50 new dwellings in Wingrave and none in Rowsham. On advice from AVDC the Neighbourhood Plan Steering Group were thus working towards a plan for 40 homes in Wingrave.

Unfortunately in February 2014 AVDC withdrew their Plan because the Independent Inspector raised a number of concerns including the planned level of housing and employment and whether AVDC had worked closely enough with neighbouring authorities.

Whilst some Neighbourhood Plan activities could continue, the Parish Council needed guidance as to how many houses to plan for. It subsequently became clear that AVDC had to plan for substantially more dwellings than they had previously and that the new AVDC Plan was unlikely to be approved until 2017 at the earliest.

Hence for the period to 2017, Wingrave would be vulnerable to speculative developers who would only have to demonstrate compliance with the broad requirements of the National Planning Policy Framework to get planning approval and there would be nothing either AVDC or the Parish Council could do to prevent such applications. The Parish Council was unanimous in its view that this situation must be addressed.

Wingrave Parish Council was advised in meetings at AVDC to ensure the Wingrave Neighbourhood Plan would pass the various Tests and Independent Inspections that our plan should cater for 90 to 130 dwellings for the next 19 years.

In the summer of 2014 a number of Consultation Meetings were held to gather the Parish’s views on the types and nature of development. These consultations were carefully analysed to determine the criteria for acceptable development, both from the Parish perspective and to ensure that the criteria were compliant with relevant national planning rules. The resultant criteria included:

To ensure compliance with the National Planning Policy Framework, the plan must also address sustainability. For the Parish this is an important issue as the 2011 Census, reveals that we have an ageing population and fewer young families than at the 2001 Census.

Although the housing stock has increased from 591 to 641 homes the population has decreased from 1583 to 1512, in the period. Another sustainability issue is the Village School; it is under roll with 30% of pupils being bussed in from outside of the Parish. The 2011 Census shows that the number of older residents has increased and that there are fewer young families and children.

In 1971 the Wingrave housing stock was 320 homes and by 2011 it had more than doubled. This is 8.5 new homes per year. For the 18 years of our Neighbourhood Plan, assuming 130 new homes, the development would, if evenly distributed create 7.2 homes per year.

To provide land for 90 to 130 homes there is nothing like sufficient in-fill space remaining in Wingrave for the Neighbourhood Plan to succeed. Additional land had to be found and only land that the Landowners have agreed to make available for development can be used in a Plan. Using the Land Registry and local knowledge the Parish Council wrote to the 52 owners of the 54 tracts of land around Wingrave to ask whether they were interested in development and if so what type of development they desired.

Because it is classified as a settlement Rowsham is not eligible for housing development. Twenty-one of the Landowners responded that they were interested in housing development. Offering in total 50 hectares of land, at 20 dwellings per hectare there is land for 1000 new homes or at the government guidance of 30 homes per hectare over 1,500 homes. With developers known to be circling Wingrave and currently no protection from speculative developers the Parish Council took the decision to expedite the Neighbourhood Plan process. A proven Neighbourhood Plan consultancy was retained to ensure compliance with:

To comply with the requirements of a Neighbourhood Plan a number of documents and policies have to be prepared, these include: a brief Wingrave and Rowsham history, detailing housing growth, parish demographics, Wingrave sustainability issues, consultation history including details and results, policies on Heritage assets, Amenity assets (Shop/Post Office, Schools, Pub, Garage etc), Sports & Recreation assets, Green Spaces, Housing and policies on each site selected for development, an Employment policy etc.

The four site clusters put forward reflected the criteria determined from the summer 2014 consultation preferences and the relevant planning practice and guide lines used in determining Planning Applications. There was a 25% turnout for the February events and Cluster A, with sites at Twelve Leys, Baldways and a site south of the Leighton Rd was the preferred option. Cluster A is shown below. 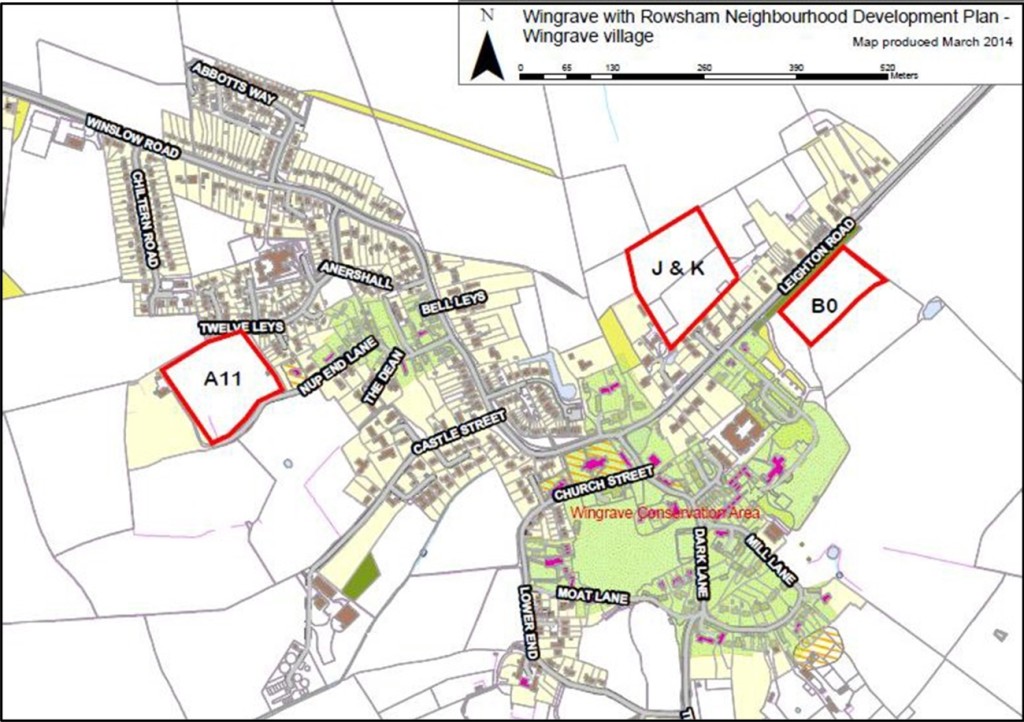 In addition to all the above activities, the required details of the Neighbourhood Plan have been sent to AVDC, Bucks County Council, Natural England and English Heritage for comment and approval.

Responses have been received and their comments are being addressed and incorporated into the draft Neighbourhood Plan.

There are a number of further steps before our Neighbourhood plan can be approved. These are detailed below:

If passed by a simple majority the Neighbourhood Plan becomes a binding part of AVDC Planning Policy for the next 18 years and will determine whether Planning Applications can be passed. The above timescales are assuming no delays by either AVDC or the Independent Examiner. The Parish Council will do all in its ability to ensure the Timescales are held.

An outline Neighbourhood Plan Project chart is shown below. 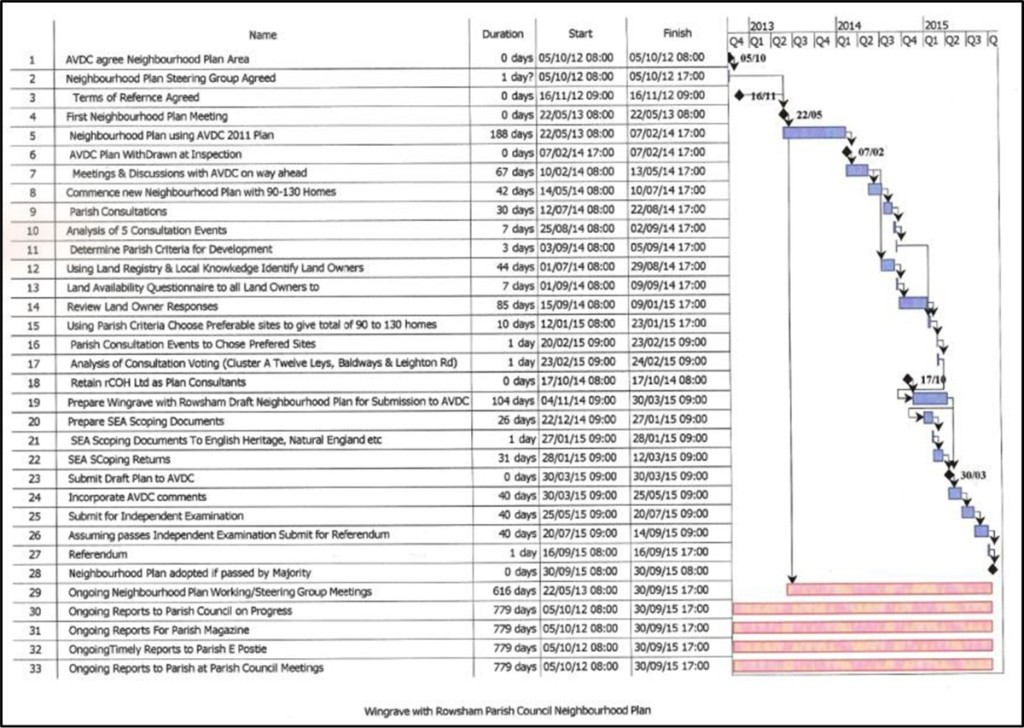